When I got done looking at my maps last night I read some. I crawled into my sleeping bag wearing my wool long underwear bottoms, top and hat. I brought my old blue and orange sleeping bag that I bought from Eastern Mountain Sports (EMS Lob Pine) in 1978. This store used to be just west of Snelling Ave on County Road B2. Now that I think about it I believe the first Minnesota REI store was near by, around the corner on Snelling Ave just south of County Road B2.

This sleeping bag is now only good to be used as warm weather sleeping bag, but I did bring an older winter bag just in case. I bought a Merino Wool sleeping bag liner for this trip. Well, at first I was way too warm when I got into my sleeping bag. Sometime during the night I took off my poly pro socks, then my wool long underwear bottoms.

The temperature dropped significantly so I needed to put both the socks and bottoms back on. It continued to rain on and off all night long. The wind continued to blow hard and it sure was consistent. Even with putting my clothes back on I could feel the cold seeping through the sleeping bag.

I grabbed my winter bag that was already in the tent and pulled it over me like a blanket. I warmed up immediately. I was going to put on my fleece pants, but it was much quicker to throw the winter bag over me.

It was snowing at 0715 am. I don’t know when it actually started to snow, but I could hear the distinct sounds of snow hitting the sides of the tent when I woke. When I looked out of the tent I told myself that I was right, It was in fact snowing! 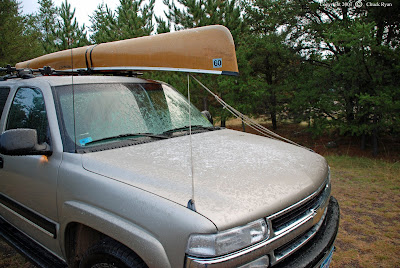 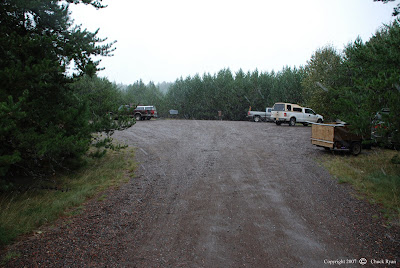 I put on my boots and went outside. It was nasty out. I checked out the latrine and took some photos of the snow. By the time I got back in the tent my hands were very cold. I found my fingerless wool gloves and put them on. I tried to go back to sleep because I was trying to prolong my misery due to the wind, snow and cold temperatures, but all I did was toss from one side to the other. This was unlike me to try to go back to sleep at this time in the morning, because once I’m up at a reasonable time I get up.

There really wasn’t any use in trying to get on the lake too early today because the wind was blowing so hard. If I got on the lake now all I would be doing is finding the first campsite and ride out the weather.

Well, I stayed in the tent until 0900 am. Finally I told myself, either get up or go home! I crawled out of my tent and there was a guy over by a small pickup truck. I went over to talk with him. He told me his name was Duane and he was from Faribault, Minnesota. 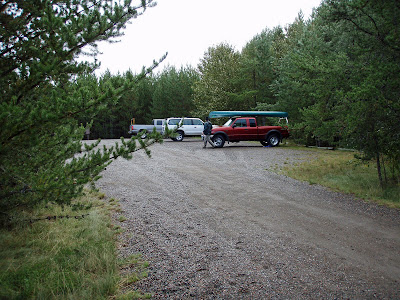 Duane told me this was his first solo trip with his Bell solo canoe. He had been out since last Saturday. Duane said the lake was real choppy and he had some problems negotiating the wind and waves coming back to the landing. Duane looked pretty cold from his short distance paddle that actually took him much longer with the weather.

I started coffee and began breakfast when Duane walked over to where I was cooking. Duane accepted my offer to have some coffee. We talked for about a half hour or so.

It didn’t look like the wind was going to let up at all. I just finished breakfast when two guys walked up the portage from the lake. One guy was from the Twin Cities and the other guy was from Two Harbors. They said they were out for a couple days and had done some fishing. They were camped on Boga Lake on the point. They said it was a nice site.

It was 1000 am now. I decided I would go get my canoe set up and head toward this camp site. Then tomorrow I could do a day trip into Ferne Lake.

The sky looked like it would start to clear up, then it would cloud back up, then snow hard for 5 to 10 minutes, clear up, get cloudy, snow. This would go on about 20 times.

While I was packing up and preparing my canoe I saw another two guys driving through the parking lot. I thought they were with the Forest Service, but I’m not to sure. They just looked at me, drove off and returned shortly. I was busy packing and I didn’t see them leave again, but when I looked to see where they were I couldn’t find them. 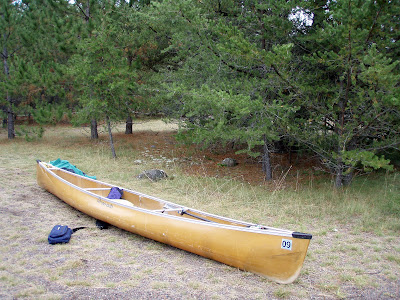 I was getting ready to portage my gear down to the lake when a mini van with a small trailer pulled in the parking lot. Inside was an adult male and female with three small children. They were from the Twin Cities. I asked them where they were headed and they said the campsite on Boga Lake. This was the same one I planned to go to after speaking with the two guys earlier. This couple asked me if this was where I was going to go, but I told them they could have the campsite. I told them it was vacant because two guys had just returned from camping at the site.

When I portaged some of my gear down to the lake there were some very large white caps. The strong wind was blowing from the northwest to a more northerly direction. I looked at the family of five with their two canoes and wondered how they were going to get to Boga Lake with the wind blowing the way it was. They didn’t appear to be dressed for this inclement weather.

When I spoke to the lady who was wearing blue jeans she commented on my Cabela’s Extreme Wear rain gear. She said that’s what they needed to be wearing. I agreed with her.

I went back up the portage trail to move my Suburban closer to the trail head and to grab the rest of my gear.

The family of five quickly had their canoe gear together and they were now on the water heading to the east. I couldn’t believe they were attempting to paddle in the big waves dressed in their minimal clothing in this weather. They would be getting the full brunt of the wind and waves if they attempted to get to the portage to Boga Lake. They headed east along the shore and were quickly out of my sight when they rounded a point land near this landing. If I had to guess this family made it to the first campsite on the right not far from the landing and stopped. I was actually nervous thinking what could happen to them in those waves.

I shoved off, but I didn’t note the time since another snow squall was passing and the wind intensified. I moved very slowly off to the west in the large waves. I thought to myself, "What the hell am I doing!" The snow was being blown hard, stinging my face and coating my glasses to where I couldn’t see. 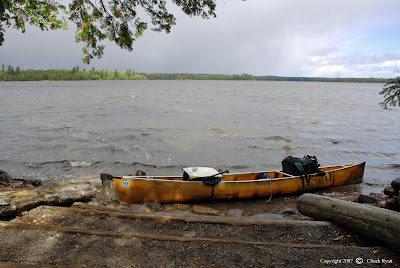 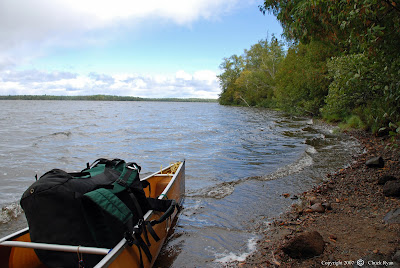 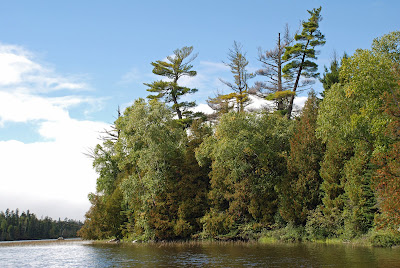 All I could do now was cautiously paddle to the west keeping the canoe upright. There was a campsite about a half mile away. If I made it that far I was going to stop and reassess the situation. I made it to this campsite. I been on this site before, but I have never camped on it.

I parked my canoe on the sand beach, took some photos and walked along the shore to the west to the next point. When I looked further to the west around the small point that I was now standing on I could see the waves and they didn’t appear to be as bad as from where I just came. The shore to the north was now closer to this shore and it was taming the wind.

When I got back into my canoe I continued in a westerly direction. Eventually, I crossed the lake in a northwest direction to check on another campsite. It was a small site that faced to the south. There were enough open areas for three or four tents, though. 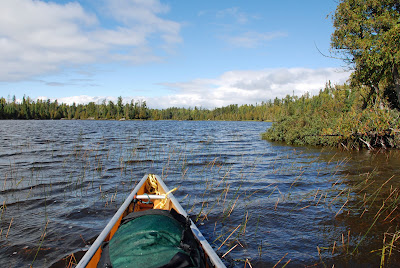 I stopped by another campsite to check it out. When I was done looking this campsite over, I went over into a couple of bays along the north shore and padded around for a couple hours looking the area over. When I got done with that I paddled to the west to the portage that crossed the Pow Wow Hiking Trail. This was in the same area that I walked to yesterday. 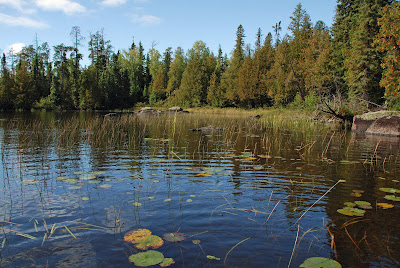 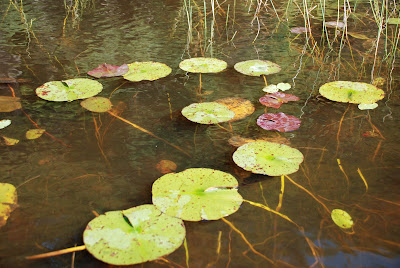 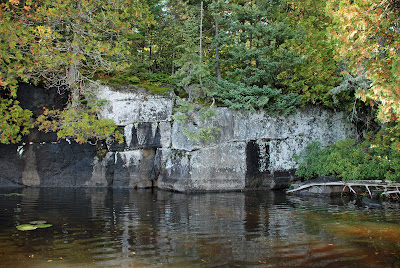 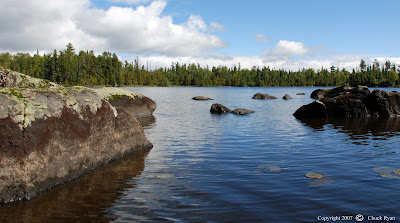 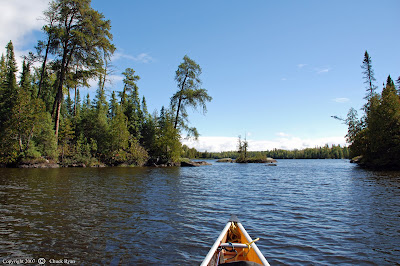 Next I paddled back to the east past the campsite I would eventually camp on. There was another campsite further east that I wanted to look over. There were some people camped there so I wasn’t able to check this site out. I turned around and came back to the campsite where I set up camp around 0300 pm. 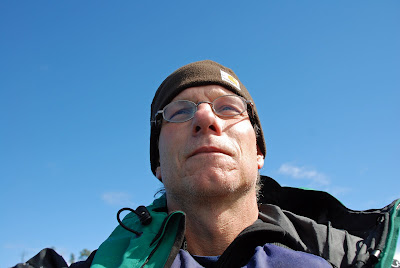 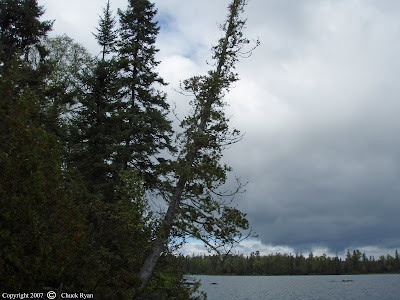 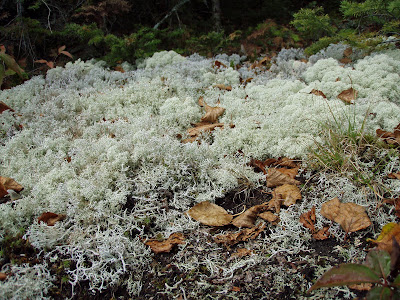 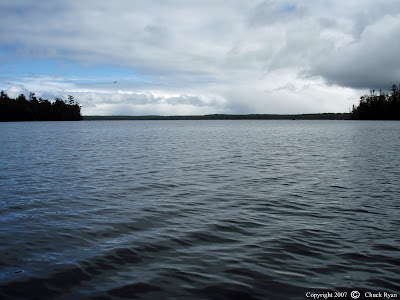 Supper was chicken and venison with couscous and vanilla pudding. Yes, venison! I had dehydrated both chicken and venison. The chicken was pretty chewy so I decided to add some venison to it. I made some coffee afterwards while I sat back on my therm-a- rest chair. I had the back of the chair up against a large rock while snacking on some gorp while writing in my journal. 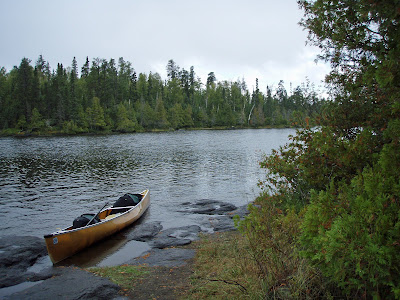 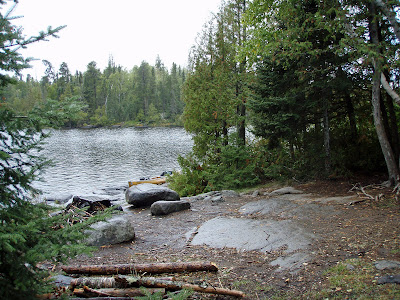 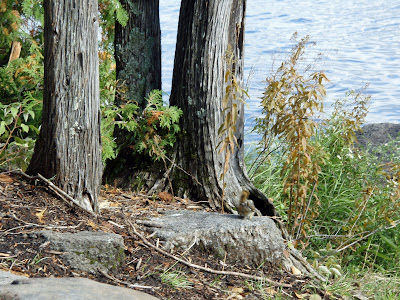 The weather hasn’t been all that good, so I’ve been wearing my rain gear the entire day. Actually I took the jacket off for awhile, but I put it back on about a half hour ago as well as some light weight polypro gloves. It’s cool out while sitting still. It’s 0628 pm and I can feel the temperature slowly dropping. The wind is still blowing more from the NW, but I’m sheltered by the trees on this campsite.

I’m waiting for the sun to go down, so I can hopefully get some photos. Someone had left some smaller pieces of wood by the fire grate. I haven’t had a fire in a while so maybe I’ll have one tonight. 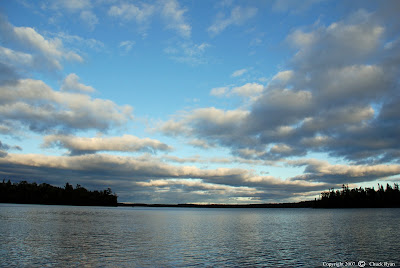 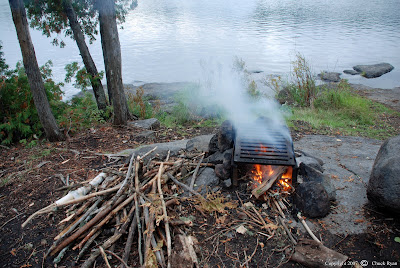 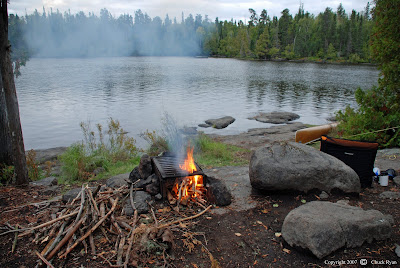 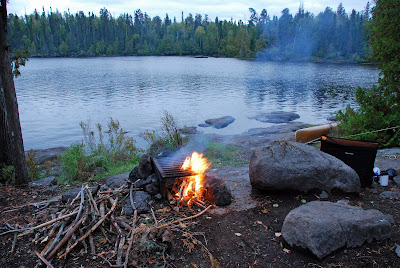 Earlier, the family of five that I saw at the landing said the winds were supposed to die down, but I didn’t ask them when.

The way the weather has been I’m glad I changed my plans yesterday, because it wouldn’t have been too fun biking the 25 miles to Hog Creek today.

Isabella Lake is a large shallow lake that is surrounded by mostly cedars, black spruce, balsam and a few birches.

The time is now 0635 pm. I’m going to stop writing now to make some more coffee and walk around a little to get the blood flowing to warm me up. I’m fine; its just sitting around that I get cool as the temperature continues to go down. 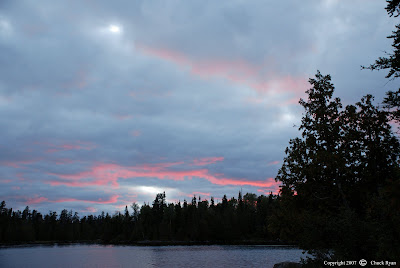 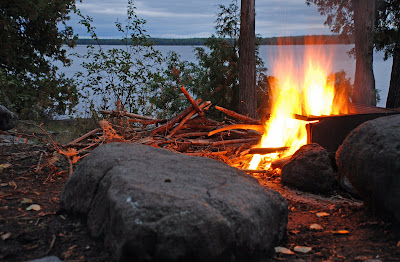 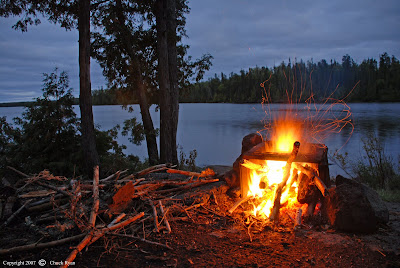 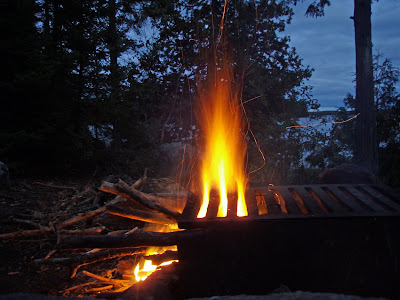