My alarm went off at 0600 am this morning. I was already packed so all I had to do was have my oatmeal and make some coffee. I was on the road at 0729 am. Traffic was really bad this morning. I tried getting on Highway 610 off Winnetka Avenue, but traffic was all backed up. I made a u-turn and made my way further to the west and eventually got on Highway 610 off Zane Av N. It took me about a half hour to get out of Brooklyn Park.

It was 62 degrees out when I left home and breezy. There were hazy blue skies to the north, but within and hour and a half the skies were now completely cloudy.

The trees were changing colors. The yellows were nice and bright. The temperature had gone up a couple degrees by the time I drove through Duluth, MN. I stopped at the Holiday Gas in Two Harbors and got some gas for the Suburban. Past Beaver Bay, along the north shore, the deciduous trees were past their peak, but they still looked good. The tamaracks were turning a bright yellow color.

I drove down to the warehouse at the Isabella Work Station where the BWCA permits can be picked although I didn’t need to get one this time. All I would need were some day use permits. The office was closed for the season so I walked to the “employee only” door of the same warehouse. There were three Forest Service employees sitting at a table working. There were two guys and a gal. When I asked them about another employee who usually worked out of Isabella they told me he was working out of Tofte for the winter.

These three employees didn’t work out of Isabella, either. They were in the area working on other projects. The guy who did most of the talking worked out of Tofte on the fire crew. The female worked out of the Aurora District and the other guy worked in fisheries, but I don’t know what Ranger District. I stopped in for only about 5 minutes before heading on my way.

When I drove back through the town of Isabella I saw someone who was putting a metal roof on the old Olga’s Bar that had burned down.

I drove down the three quarter mile access road to Eighteen Lake. There was another person coming out. I spoke to him briefly. He told me he wasn’t camped there, but there was someone else who was camping. It looked like this person was doing some hunting but he didn’t say if it was for grouse or moose.

When I drove down to the lake there was a Hot Tent made by Cabela’s that was set up. There wasn’t anyone around. They must have been out hunting. Most likely these guys were moose hunting. 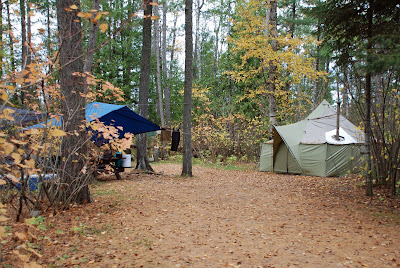 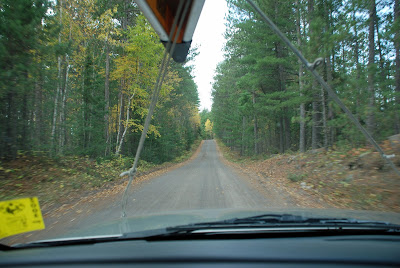 After taking some photos near the lake I headed north to the Island River. There was a truck with a trailer parked in the lot. I wanted to see who was in the lot before I turned around and went back to the railroad grade road. If I recall I think I pulled in around 1250 pm. 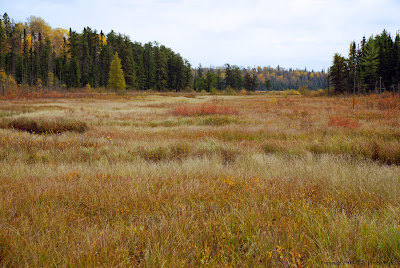 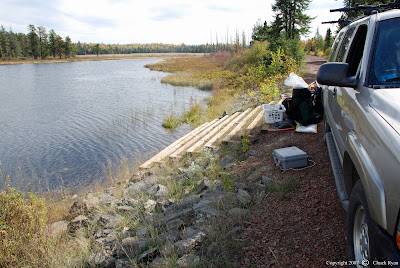 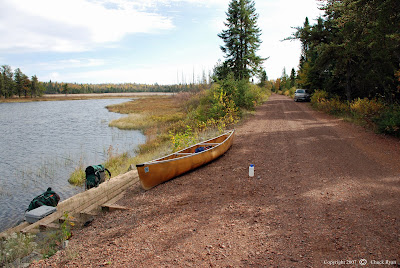 I got my canoe down off my Suburban and got my gear ready to go. I was now paddling upstream on the Island River at 0153 pm. There was a northwest wind. The sun began to come out when I was in Isabella. When the sun hit the yellow tamaracks it made then “pop”. The sun really brought out the colors in the trees. 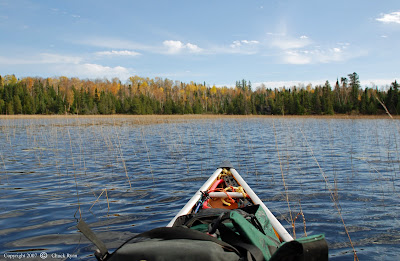 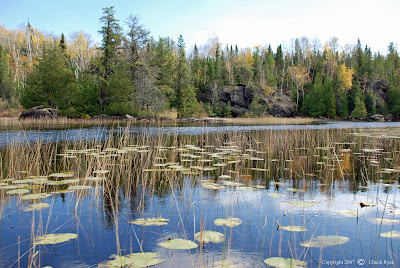 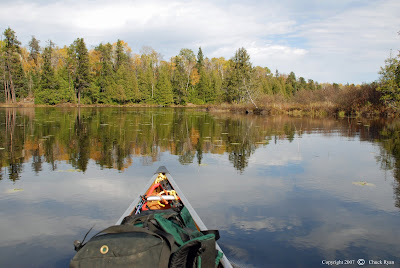 I wasn’t sure of my plans so I checked on a campsite that was a short distance downstream of the first portage. It would be fine it I wanted to use it. 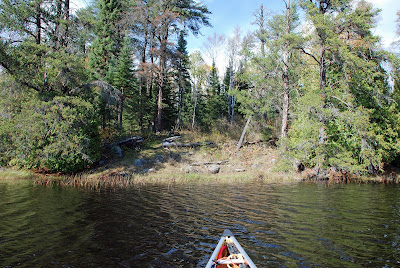 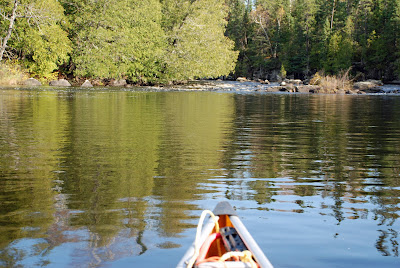 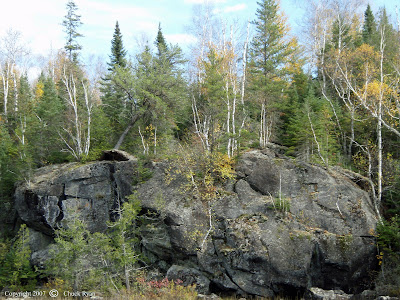 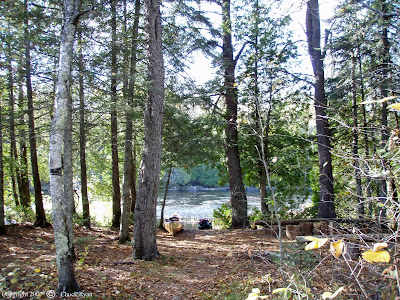 When I got back on the water after the portage I immediately began looking for the “imposing block of Gabbro” for the pictographs. I searched the entire south shore, but found nothing. It’s possible the rock was covered with lichen, I just don’t know. Maybe if I knew exactly which rock maybe the pictographs could be seen.

There was a red glob on the west facing portion of the rock face that I hadn’t seen on the last trip. I don’t know if these are red ochre smudges or not. There isn’t any documentation of these if these were some type of pictograph. This red glob is on the west side of the rock face and the dark colored one are on the north facing side of this rock. After taken some photos of the red glob, I took several more of the dark colored pictographs on the north face. I looked further at the ladder like detail and I came to the conclusion that these aren’t raised lines. What looks like the number three is some material falling away from the rock and it just so happens to look like the number three. 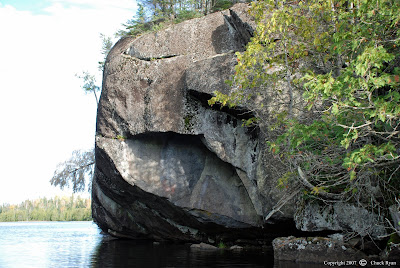 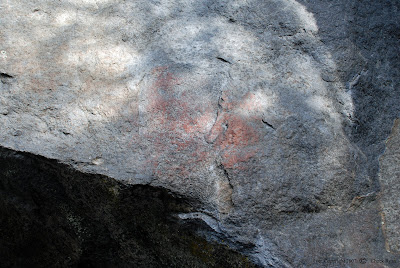 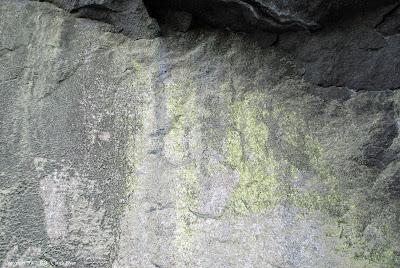 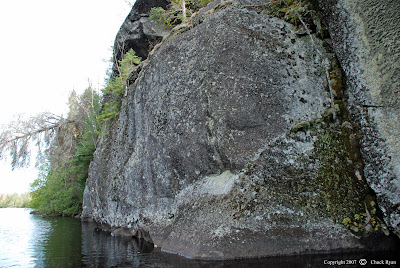 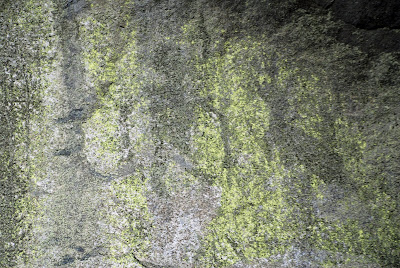 When I was done with taking photos of this area, I paddled upstream a short distance to a campsite on the Island River that is actually in the BWCA. It’s not a bad site and it doesn’t appear to get that much use. Although I didn’t look around that much I don’t recall seeing a tent pad, Maybe it was down the trail that I started to follow or it was a trail to the latrine, I didn’t go to far because there were a couple large jack pine lying across the trail and at the back of the campsite. I turned around and walked back to my canoe. 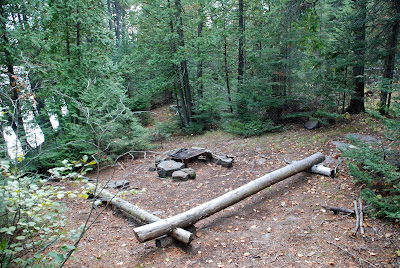 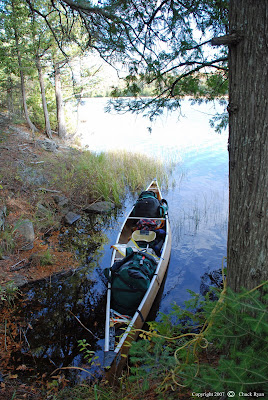 After back tracking past the dark colored pictographs, I swung back toward the south shore to check the rocks again for the other set of red pictographs. Again, I didn’t see anything. Next it was back across the 25 to 30 rod portage. Now I had to make a decision on if I wanted to camp at the campsite on the river or go back to my Suburban and camping at the Isabella Lake parking lot again. It would save me time in the morning if I camped in the parking lot.

I couldn’t make up my mind at first. I decided to camp at the river campsite, then I changed my mind and headed back to the landing, then I changed my mind again. I got to the river site and I got all my gear out of the canoe at 0507 pm. When I looked at the tent pad I decided I really didn’t like it. The real reason I probably didn’t like it was I knew I could save an hour and a half tomorrow if I paddled out tonight. Tomorrow I was going to ride my Mountain Bike to Hog Creek. I was back in my canoe heading back to the Island River landing at 0517 pm. 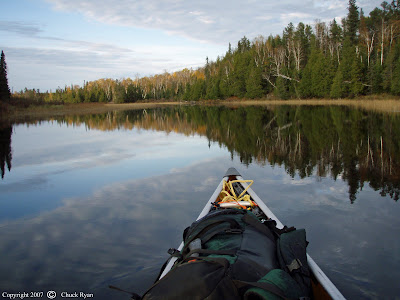 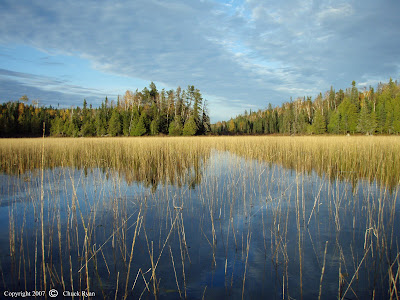 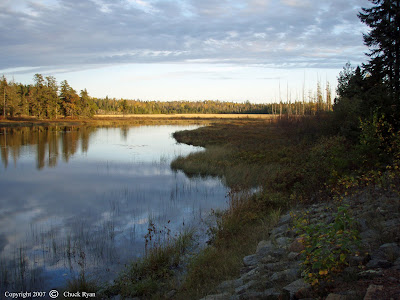 It took me only 33 minutes to get back to my Suburban. Once again I was throwing my gear inside and putting the canoe on the rack. Now it was time to pour myself a cup of coffee from my thermos while I drove off toward Isabella Lake at 0600 pm.

When I got to the parking lot of Isabella Lake I didn’t waste any time setting up my tent, etc. For dinner I made venison spaghetti, French Vanilla pudding and some coffee.

There was one other vehicle in the lot when I pulled in. Then around 7 pm a truck with a 4-wheeler in the back of it drove through the lot and back out. When I finished dinner I began to write in my journal. I stopped writing about 0815 pm to start reading a book that I brought, Tipis, Tepees, Teepees-History and Design of the Cloth Tipi, by Linda A. Holley.
Posted by CIIcanoe at 6:41 PM