It rained for most of the night. Every time I woke up I could hear the wind blowing and the waves below me lapping upon shore. If the wind continues the way it was now then I might not be able to get to the west side of the lake to get to the Perent River today.This thought running through my head didn’t help me get back to sleep. The sound of the waves lapping up on shore sounded louder than they did yesterday. Besides all the rain and wind last night there was a considerable amount of thunder and lightening going on.

When I was just about ready to get out of the tent I started doing my lower back exercises. I started them at about 0745 am. When I got out of the tent I stared at the large waves sizing them up. Should I go or should I stay? Fifteen minutes later I made the decision to try to get to the Perent River just to the west so I started to pack up. Suddenly the wind started to die down, but the sky was getting very dark. I knew something was going to happen weather wise, but I just didn't know how bad the storm would be.

I left my tent up and made some breakfast. Just as I was finished with breakfast it began to thunder and lightening. Then at 0849 am the rain really came down. Good thing I left the tent up, because I might not be going anywhere soon.

The storm eventually passed sooner than I expected. There was now a heavy humid mist in the air when I got out of the tent. I decided to go for it. The day didn’t look like it was going to get any better than what it was now. If I waited for better weather I probably wouldn’t leaving anytime soon This weather has been in this pattern for the past couple days.

The first of many portages today were about a mile to the west. I left my campsite at 1009 am. I was wearing my rain bibs because of the heavy mist and the fact it looked like it was going to rain some more.

The first portage was marked as 61 rods. The trail was in great shape. These portages were made back in the Civilian Conservation Corp (CCC) days to a very high standard. I walked across the portage with my large pack, camera case and water bottles while wearing my bibs. Once I got across the bibs came off. 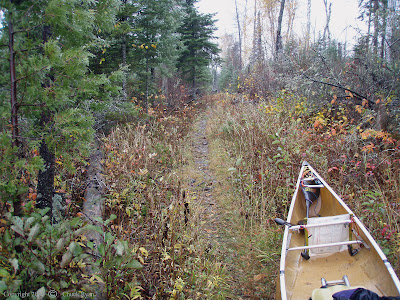 This first section of the Perent River I was very impressed with the scenery with all the fall colors and the rocks. The higher water made for an easier time paddling. I even saw a couple otters at play. While I was paddling the otters came swimming my way. One of the otters stood up and extended his body up out of the water as if was trying to get on my level for a better view of what was coming this way. 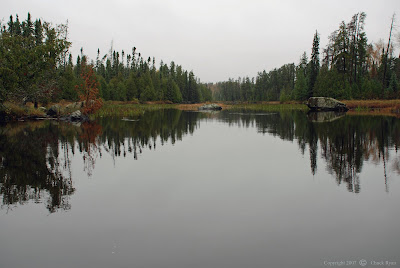 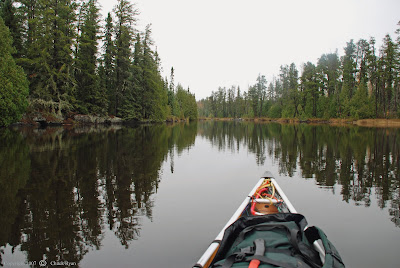 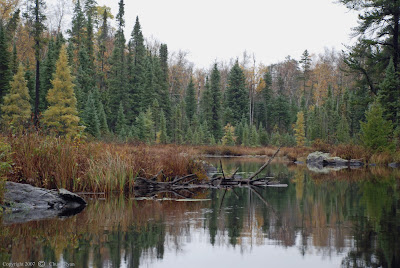 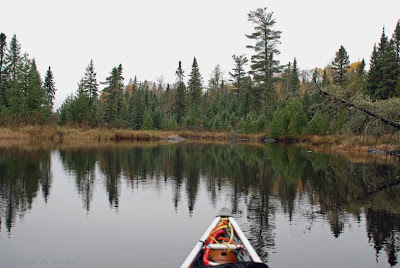 I may have been the only human this otter has seen this year. When I spoke to Char at the Isabella Work Station in September she wasn’t aware of anyone else paddling the Perent River. The water level last year and most of this year had been substantially lower than what it was now. This is also not a popular route because there are about 12 to 13 portages in this 6 miles section and it's not part of any easy circular route, so a person needs to spot a vehicle at Isabella Lake or double the number of portages and go back out the way they came.

While I paddled down the river I took in the solitude and the scenery. There were many different shades of greens, yellows and gold from all the trees. The portages came and went. I didn’t take any detail notes on the portages, but I can tell you they were all there. I took a twenty minute lunch after the 5th portage. 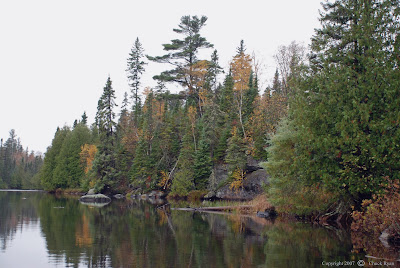 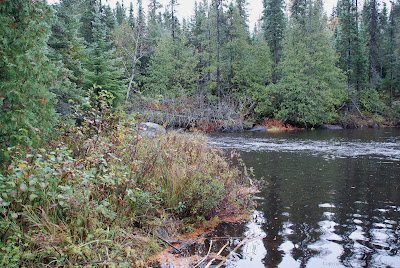 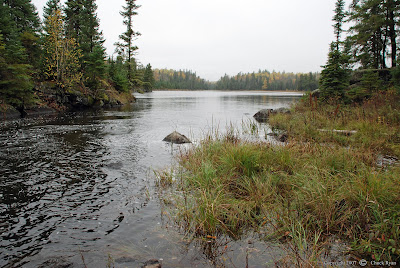 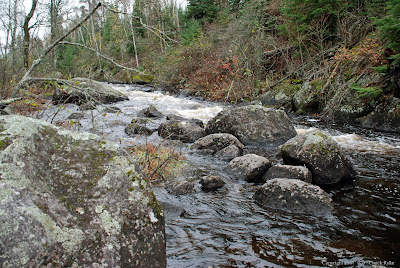 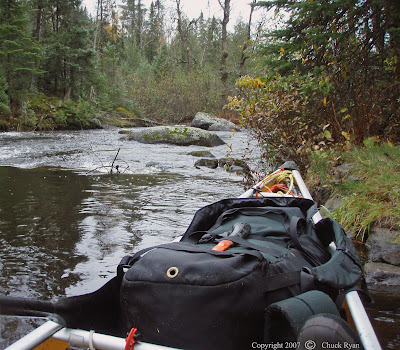 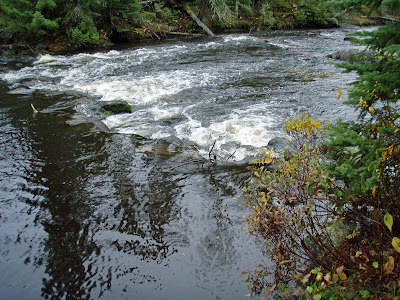 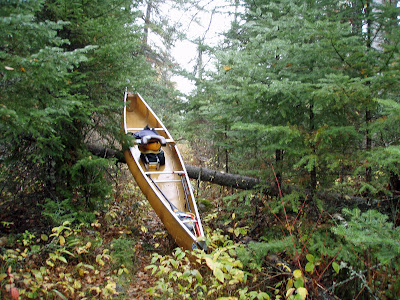 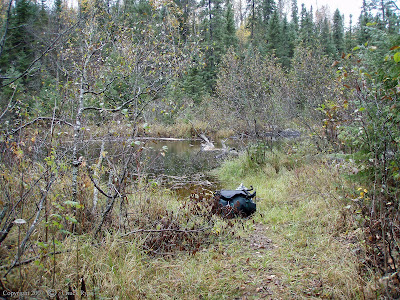 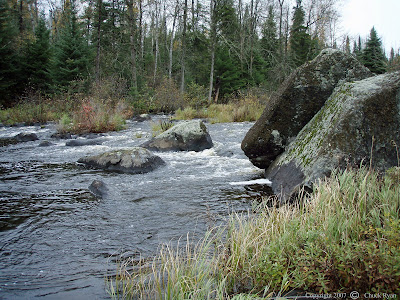 There was one portage marked on my map that I didn’t need to take, but shortly afterwards I came to a large beaver dam that was across the river. The water was flowing very fast over it. I debated to run it, but there was a good size drop to the down stream side. There were some rocks and other debris obstructions just past the drop, too. The risk was too great of running it because it probably wouldn’t go the way I reviewed it in my mind. It definitely wasn’t in my favor to run it safely.

My other problem was I couldn’t get to shore from where I was because it was all swampy muck and choked with vegetation to river right because of the backed up water. There was a little bit of water flowing over on river right so I went over there. When I got over there it was too rocky and too shallow to float a canoe. I needed to get out of the canoe into the mud and just drag the canoe to best I could over the rocks. It wasn’t pretty and while I was dragging the canoe I thought maybe I should have taken the chance to run the canoe over the beaver dam.

Past this area was a swift that I paddled through. I looked to see if there was any portage around, but I didn’t see anything. 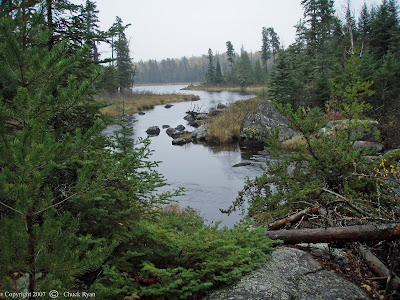 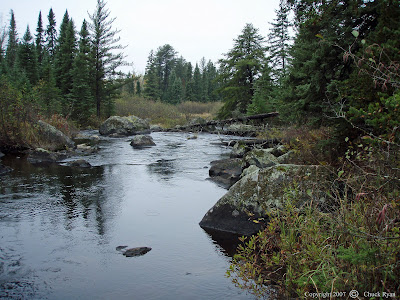 I got to the portage that crossed the old east Pow Wow Hiking trail. The hiking trail crossed the river here and the portage crossed it at right angles. I looked down to the river and saw where the wooden walk bridge for the trail once was that crossed the river, but it was no longer there. I don’t know if it was recently destroyed because of recent heavy rains or exactly when the bridge disappeared. I didn't walk along the edge of the river to see if I could find any sign of it. These earlier rains had done a lot of damage to many of the Forest Service roads. 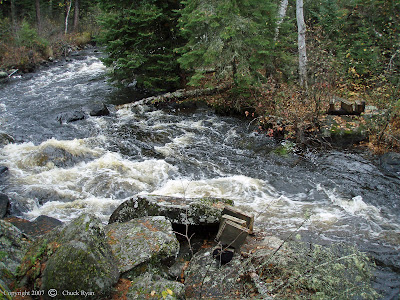 There was an old logging road the used to cross here before the trail was built. There were a couple metal rods stuck in the rock where I believe a bridge was anchored at one time for logging vehicles to cross in the old days before this area became the BWCA. I took some photos of this area. 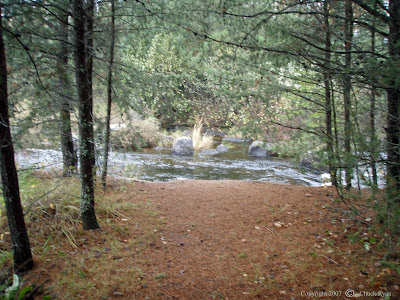 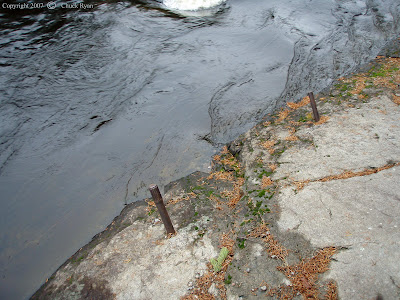 Walking around I found an area for a tent and I found the latrine, but didn’t see the fire grate although I wasn’t looking specifically for it.

I was hoping to see some moose in this area, but I never did. This general area of the Superior National Forest had one of the highest concentrations of moose when I worked up here in the early 1980’s. I did see a lot of moose tracks on the gravel roads when I was biking. 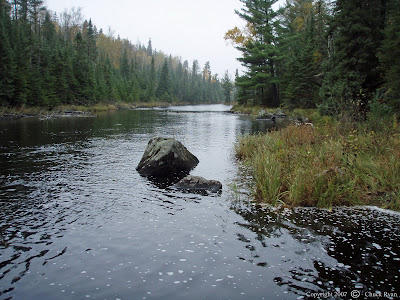 There was one portage that wasn’t marked on my map. It’s on river right about a quarter mile south of where the Pow Wow Creek meets the Perent River. After the portage I turned back to the west and now it was more evident all the mist in the air. All the trees and rocks were given a softening effect due to the limited view caused by the mist.

The skies were threatening rain again so I was going to pull off at the next campsite to throw all my rain gear on. When I got there it was taken so I just paddled on by. I didn't see anyone around, but maybe they were in the tent. I saw their canoe. The next campsite on Boga Lake was also taken, so I just continued on to the portage. After crossing the portage with my gear I finally put on my rain bibs.

The wind was from the ESE this morning but now on Isabella Lake it looked more like the ENE. I opted to paddle out of Isabella Lake back to the landing while the waves were tolerable. I’ve paddled in enough strong winds this year so I decided to just go to the landing. I got to the landing at 0430 pm. I had all my gear carried up to my Suburban by 0457 pm. 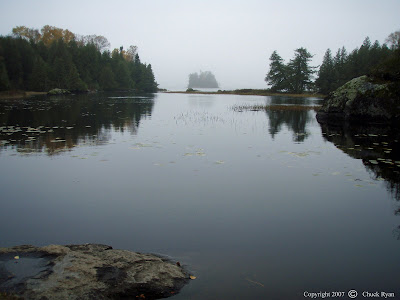 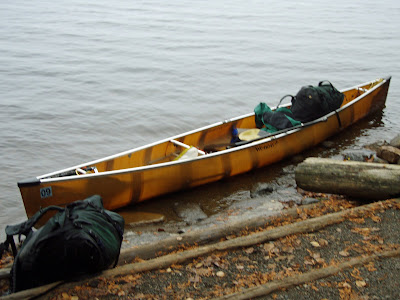 I am really happy that I made the extra effort to paddle the Perent River. The scenery was great. I’ve wanted to do this for some time.

There were some bird hunters in a camper who were camping in the parking lot. They were camped right where I had been camped the last few times.

Well, I thought of looking else where for a spot, but I decided to just go to another area of the lot. This is a large area.

I got my canoe on my Suburban and then changed out of my wet clothes. I put on my Codet #210 wool pants with my Smartwool long underwear. It was over kill, but I didn’t have any other pants. The temperatures on this trip were much warmer than I expected. 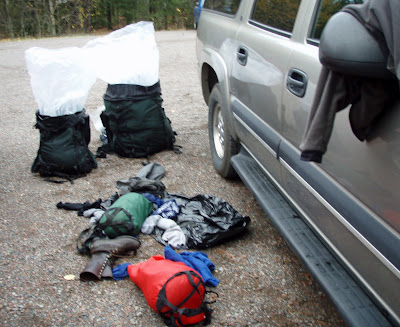 It was around 0700 pm when I was done eating. I decided to walk around the parking lot and then down the portage trail to the lake. It was dark out. I sat on a large rock near the water and reflected on the days past events. I ended up going back up to the tent around 0800 pm. I tried reading again, but I didn’t have much luck this time either.

What the hell….I’m laying in my tent trying to sleep when the bird hunter’s over in their camper started their generator. Now I’m thinking I should have camped else where. I just couldn’t believe what I was hearing!
Posted by CIIcanoe at 6:38 PM