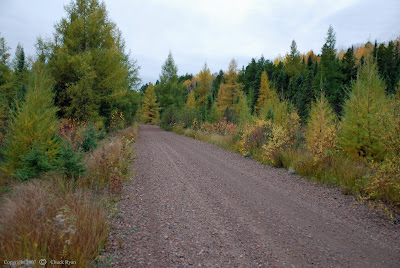 Two guys from Ely pulled into the parking lot while I was cooking breakfast. They told me it was raining in Ely and the skies showed that the rain was heading in our direction and soon. I really wanted to go with my plan of biking to Hog Creek, but now I had to be concerned on how much it would rain and how much the temperature might drop. I really didn’t want to be biking the 25 miles in a cold, hard rain. It would take me at least 2.5 hours, but more likely closer to 3 hours of biking because of the soft gravel roads.

When I got done with breakfast I drove to the Hog Creek entry point. The mileage from Isabella Lake to the Hog Creek parking lot was just less than 26 miles. I pulled my canoe off the rack and put my two packs and other gear that I would need inside the canoe. I went and hid my camera case in the woods. I was hoping all my gear would still be there when I came back to it several hours later. 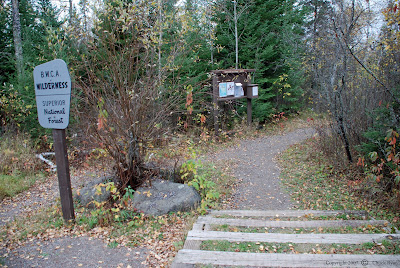 There was one car parked in the lot when I dropped off my canoe and gear. While I was putting my gear in my canoe some guy in a truck pulled in and circled the parking lot. I waved him down to see if he would give me a ride from Isabella Lake back to here, but he said he didn’t have the time. I even offered him some money.

It started to rain while I was talking to him. This didn’t change his mind. Now I just hoped the rain would either not increase or it would just stop all together.

Once we were done talking I continued on my way until I came across the Forest Service vehicle near the Island River. The vehicle had stopped at the junction with the Tomahawk Road.

When I pulled up along side the vehicle the first thing I saw was a female in the driver seat. I immediately thought I recognized her. So I told her that I thought I knew her? What a pick up line in the middle of no where. Well, she replied, no! I didn’t! My reply, Oh!

I explained to her that many years ago I worked out of the Isabella Ranger District and the person who I thought she was worked in Soils out of the Ranger District. I also had a soils class with this same person when we both were at the University of Wisconsin-River Falls. The lady told me that I was thinking of Barb L. and that she now worked out of the Supervisors Office in Duluth. I haven’t seen Barb in 25 years so maybe these two don’t look anything a like, but that was what went through my head when I saw this lady. I told her my name, but she never told me hers. I guess she didn’t want to say her name to someone with such a lame pickup line.

When I asked her if they were going back to Hog Creek she turned to the male passenger who said they weren’t. She then told me they were with the guys in the DNR truck who just pulled up.

I continued to Isabella Lake and parked my Suburban. I got out my Mountain Bike and packed my day pack with some items I would need for the ride. I left the parking lot on my bike at 1040 am. It wasn’t too long before I needed to pull over and put my rain jacket on now that it began to rain harder. I wanted to put it on before I got too wet, but at the same time I knew I would be sweating inside the Gore-tex jacket.

There was another truck coming across the railroad grate, but in the opposite direction that I was going. These guys looked like they were out hunting. When I was a short distance from the Sawbill Landing Road another car pulled over to the right side of the roadway and waited for me to bike out to him. We talked for a minute or so. He reminded me that it was Moose season and he thought I should have an orange hat on. Well, I did have one, but it was still lying on the front seat of the Suburban. Hopefully the moose hunters that are road hunting are on the road and those who are hunting in the woods are looking away from the road. Anyways, I wasn’t too concerned.

During my bike ride across the railroad grade I saw where several sections of the roadway had been washed away from the recent rains and those areas had already been filled in and repaired.

It kept on raining on and off as I biked. I was also wet from perspiring in the non-breathable rain jacket. I stopped about three times on my way to Hog Creek to take the jacket off in hopes that the wind would dry me off. Nope, it was too humid.

I took some photos of my bike next to the different road signs marking the distance to Hog Creek. The last nine miles were the toughest. The lower section of this road had recently been repair due to the recent rains. The gravel / sand was much softer where the road bed had been repaired. This section of the road was also uphill. 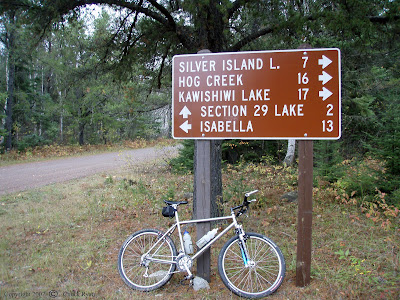 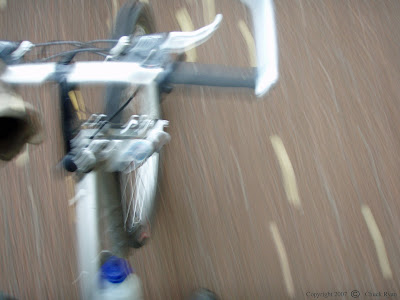 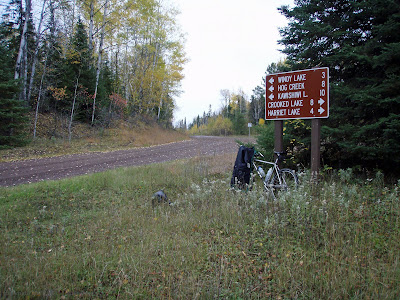 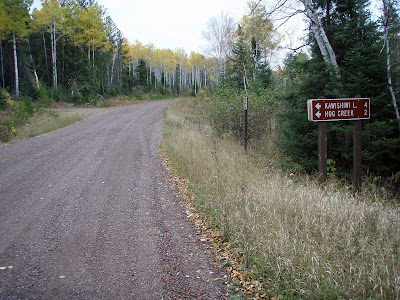 My timing wasn’t off by too much. I arrived at the parking lot 5 minutes shy of 3 hours at 0135 pm. There was a truck that had parked next to my canoe since I’ve been gone. I went in the woods to retrieve my camera case. Then I took my bike further back in the woods out of sight. I covered it with some black plastic sheeting to keep most of the rain off it.

When I got everything secured that needed to be secured in the canoe I brought it and my packs down the portage to the river. When I was done taking some photos I put my rain bibs on since there was still a light rain. I left my jacket off, but it wouldn’t be too hard to put it on if it began too rain harder.

The wind had been blowing hard since this morning. Although it didn’t bother me while biking and it won’t be a problem paddling Hog Creek, but it could be a problem when I got to Perent Lake. 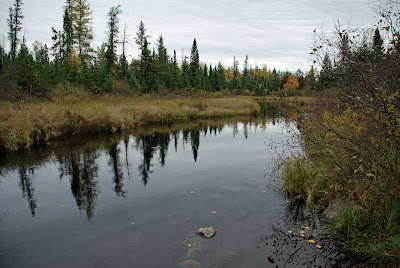 I’m finally paddling down Hog Creek at 0209 pm. I’ve never seen this much water in the creek before, especially at this time of the year. It took me an hour and a half to paddle and portage to Perent Lake. Due to the wind blowing out of the east I decided to follow the shoreline to the north. I determined this course based upon where I hope to end up for the day and wind direction. 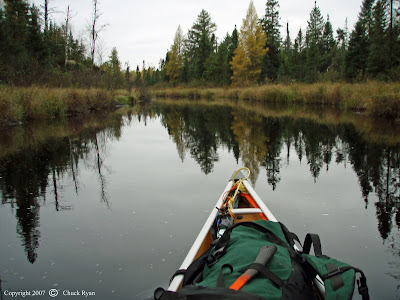 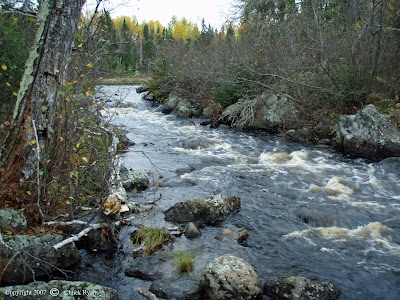 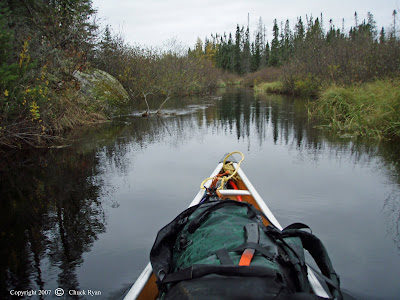 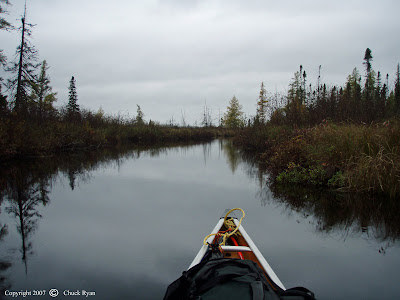 Before paddling on up along the north shore I scanned the lake. I could see a canoe at a campsite on the south shore. Once I got to paddling there was an island campsite that I saw was occupied. I was a ways from them, but I think they saw me paddling in the waves.

The waves kept getting bigger and bigger and bigger the further west I went. I finally had to pull off at the 4th campsite along the north shore from Hog Creek. The waves were just too big and it’s a good thing I stopped because shortly afterwards they got even bigger. It was now 0417 pm. 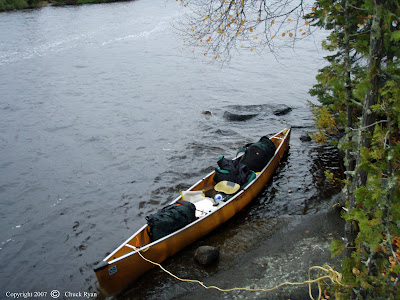 After I got to the campsite I set up my tent and tarp, then I grabbed my therm-a-rest seat and sat down to relaxed for 15 minutes. Well, I needed to make supper and coffee. Afterwards, I went down to the lake and filtered water. 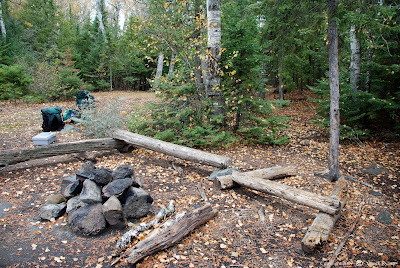 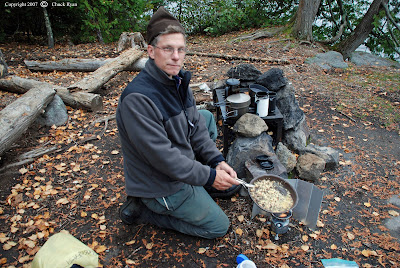 It began to rain hard, again. I hurried up and got all my gear organized. Some gear went in the tent and the rest under the tarp that I previously had put up. Then the rain stopped! This was now a good time to gather some wood. There was a dead balsam that was down on the ground. I cut it up for firewood. The fire was going and once it started producing enough heat I decided to dry my boots, aqua socks and the leather gloves I wore biking.

It was 0803 pm when I briefly turned off my headlamp sitting with by back to the fire that was dying down. It was absolutely black out. The waves continued to lap up on shore making a rhythmic sound from the easterly wind.

After listening to the different sounds of nature I decide to go in the tent and read. That was the plan. Of course things changed once I got in the tent. I read a couple pages. Sleep was more interesting at the moment so down goes the book for the night. I seem to have big plans to read most nights, but I find by the time I decide to read that I’m absolutely so tired that I really can’t concentrate on what I’m reading. I guess I’ll continue to bring a book to read, but I will probably only read on those down days due to the weather.

Most of the photos I took today were with my Olympus 770 SW since it was raining on and off. I tried to take some with my Nikon, but the lens would fog up from the humidity.
Posted by CIIcanoe at 6:39 PM